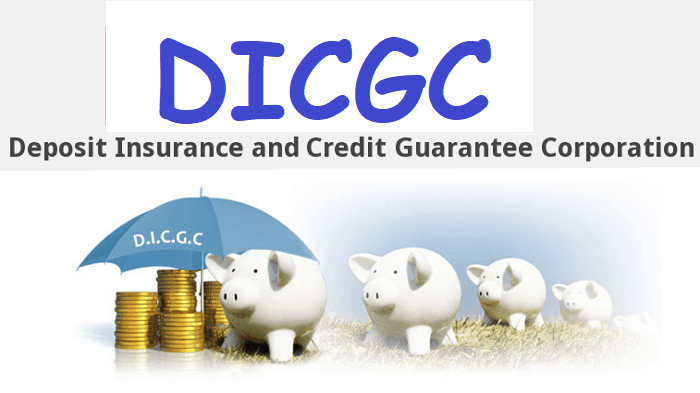 DICGC insures all bank deposits, such as saving, fixed, current, recurring deposits for up to the limit of Rs. 500,000 of each deposit in a bank.

1. Which banks are insured by the DICGC?

Commercial Banks: All commercial banks including branches of foreign banks functioning in India, local area banks and regional rural banks are insured by the DICGC.

Primary cooperative societies are not insured by the DICGC.

2. What does the DICGC insure?

3. What is the maximum deposit amount insured by the DICGC?

Each depositor in a bank is insured upto a maximum of5,00,000 (Rupees Five Lakhs) for both principal and interest amount held by him in the same right and same capacity as on the date of liquidation/cancellation of bank’s licence or the date on which the scheme of amalgamation/merger/reconstruction comes into force.

4. How will you know whether your bank is insured by the DICGC or not?

The DICGC while registering the banks as insured banks furnishes them with printed leaflets for display giving information relating to the protection afforded by the Corporation to the depositors of the insured banks. In case of doubt, depositor should make specific enquiry from the branch official in this regard.

5. What is the ceiling on amount of Insured deposits kept by one person in different branches of a bank?

The deposits kept in different branches of a bank are aggregated for the purpose of insurance cover and a maximum amount of upto Rupees five lakhs is paid.

6. Does the DICGC insure just the principal on an account or both principal and accrued interest?

7. Can deposit insurance be increased by depositing funds into several different accounts all at the same bank?

All funds held in the same type of ownership at the same bank are added together before deposit insurance is determined. If the funds are in different types of ownership or are deposited into separate banks they would then be separately insured.

Yes. If you have deposits with more than one bank, deposit insurance coverage limit is applied separately to the deposits in each bank.

9. If I have my funds on deposit at two different banks, and those two banks are closed on the same day, are my funds added together, or insured separately?

Your funds from each bank would be insured separately, regardless of the date of closure.

If Shri S.K. Pandit also opens other deposit accounts in his capacity as a partner of a firm or guardian of a minor or director of a company or trustee of a trust or a joint account, say with his wife Smt. K. A. Pandit, in one or more branches of the bank then such accounts are considered as held in different capacity and different right. Accordingly, such deposits accounts will also enjoy the insurance cover upto rupees five lakhs separately.

It is further clarified that the deposit held in the name of the proprietary concern where a depositor is the sole proprietor and the amount of Deposit held in his individual capacity are aggregated and insurance cover is available upto rupees five lakhs in maximum.

If more than one deposit accounts (Savings, Current, Recurring or Fixed deposit) are jointly held by individuals in one or more branch of a bank say three individuals A, B & C hold more than one joint deposit accounts in which their names appear in the same order then all these accounts are considered as held in the same capacity and in the same right. Accordingly, balances held in all these accounts will be aggregated for the purpose of determining the insured amount within the limit of  5 lakhs.

11. Can the bank deduct the amount of dues payable by the depositor?

Yes. Banks have the right to set off their dues from the amount of deposits as on cut off date. The deposit insurance is available after netting of such dues.

12. Who pays the cost of deposits insurance?

Deposit insurance premium is borne entirely by the insured bank.

If a bank is reconstructed or amalgamated / merged with another bank: The DICGC pays the bank concerned, the difference between the full amount of deposit or the limit of insurance cover in force at the time, whichever is less and the amount received by him under the reconstruction / amalgamation scheme within two months from the date of receipt of claim list from the transferee bank / Chief Executive Officer of the insured bank/transferee bank as the case may be.”

14. Does the DICGC directly deal with the depositors of failed banks?

No. In the event of a bank’s liquidation, the liquidator prepares depositor wise claim list and sends it to the DICGC for scrutiny and payment. The DICGC pays the money to the liquidator who is liable to pay to the depositors. In the case of amalgamation / merger of banks, the amount due to each depositor is paid to the transferee bank.

15. Can any insured bank withdraw from the DICGC coverage?

No. The deposit insurance scheme is compulsory and no bank can withdraw from it.

16. Can the DICGC withdraw deposit insurance coverage from any bank?

The Corporation may cancel the registration of an insured bank if it fails to pay the premium for three consecutive periods. In the event of the DICGC withdrawing its coverage from any bank for default in the payment of premium the public will be notified through newspapers. Registration of an insured bank stands cancelled if the bank is prohibited from receiving fresh deposits; or its licence is cancelled or a licence is refused to it by the RBI; or it is wound up either voluntarily or compulsorily; or it ceases to be a banking company or a co-operative bank within the meaning of Section 36A(2) of the Banking Regulation Act, 1949; or it has transferred all its deposit liabilities to any other institution; or it is amalgamated with any other bank or a scheme of compromise or arrangement or of reconstruction has been sanctioned by a competent authority and the said scheme does not permit acceptance of fresh deposits. In the event of the cancellation of registration of a bank, deposits of the bank remain covered by the insurance till the date of the cancellation.

17. What will be the Corporation’s liability to the banks on de-registration.

The Corporation has deposit insurance liability on liquidation etc. of “Insured banks” i.e. banks which have been de-registered (a) on account of prohibition on receiving fresh deposits or (b) on cancellation of license or it is found that license cannot be granted. The liability of the Corporation in these cases is limited to the extent of deposits as on the date of cancellation of registration of bank as an insured bank.

On liquidation etc. of other de-registered banks i.e. banks which have been de-registered on other grounds such as non-payment of premium or their ceasing to be eligible co-operative banks under section 2(gg) of the DICGC Act, 1961, the Corporation will have no liability.