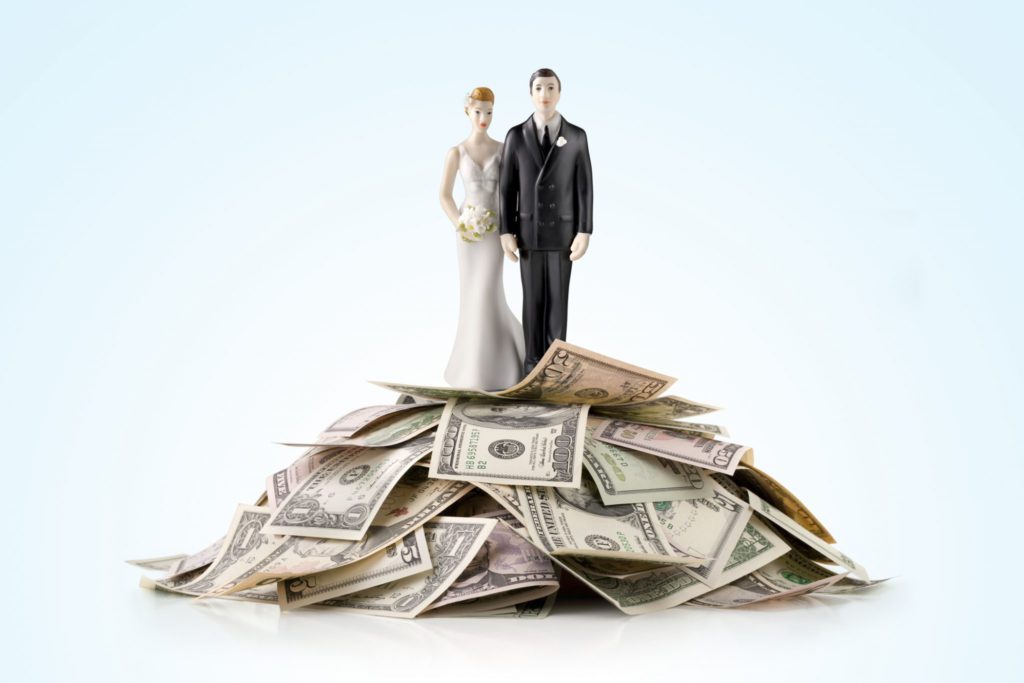 Money concerns are so unpleasant that respondents who believe their relationship is stressed identify economics as the number one cause, handily knocking out the second place contender: irritating behaviours.

According to the Institute for Divorce Financial Analysis, money concerns account for 22 percent of all divorces, making them the third most common factor.

This may appear to be a bleak forecast for married couples, but it isn’t. Experts believe there are a number of actions couples can take to prevent letting money problems ruin their marriage.

Many couples put off discussing money until after they marry, but this lack of information may be dangerous; past errors can have an impact on your future together. Before you walk down the aisle, get to know each other’s financial status, such as how many credit cards you both have and how you spend your money including what types of goods you both enjoy. Having a strong understanding of your partner’s spending patterns and financial situation will aid you in deciding how to integrate your finances once you marry.

Many disputes between couples that appear to be about money aren’t really about money at all. It’s really a clash of personalities.

Temperament is a big source of potential conflict. One person may be concerned that their spouse spends too much, but the problem may not be that they can’t afford it, but rather that they are afraid of not being able to pay their expenses in the future.

3. Set aside money for the wedding and beyond

Open a savings account for your financial objectives and future costs as soon as you announce your engagement. Many experts advocate placing at least 10% of your combined monthly income into savings. If you’re saving for a wedding, consider increasing the amount so you may keep contributing to your regular savings while still saving for the big day. Even if your wedding will be paid for by others, you’ll probably want to save some money for a honeymoon or a down payment on a new house.

4. Tell the truth about your Financial Situation

The majority of people do not start a relationship with a clean financial slate. Before combining your funds, it’s critical to be honest with your spouse about your financial situation. If one or both spouses have severe debt, how you share expenses and establish financial objectives may be affected. It can also cause tension in a relationship, especially if one spouse owes a lot more money than the other.

Because credit is related to the individual, your partner’s pre-marriage debts will have no bearing on your credit. Many states, however, use the common law system, which means that debts accrued while you’re married may impact both partners.

5. Communicate your Goals and Priorities

It’s critical to talk to your partner about your spending habits, lifestyles, and financial objectives.

Financial problems are the most common cause of marital strife and the second most common reason of divorce.

Misunderstandings and disputes may be avoided with good communication from the start. Money arguments in marriage aren’t usually about a lack of funds.

No of your income, if one partner is thrifty and likes to store money for a rainy day while the other partner lives large and spends freely, there is the potential for conflict.

6. Make a Decision about combining your Finances

There is no one-size-fits-all approach to deciding whether or not to merge your funds.  Some couples keep their finances separate, while others share everything.

It’s also typical to combine the two, with a joint account for significant costs and separate accounts for everyday spending.

If one couple fails to pay joint bills, it may have an impact on both partners’ credit ratings. Keep in mind that even if you keep your accounts separate, if one spouse is liable for a joint bill in both names, financial troubles for one partner might impact both partners.

According to a recent CNBC poll, 63% of Americans live paycheck to paycheck, unable to cope with unforeseen bills or crises. Saving three to six months’ worth of living costs is an important goal to set for yourself in the early years of your marriage. If an unforeseen incident occurs, such as illness or layoff, this can help you cope with the situation and weather the storm.

It’s also a good idea to talk about how to deal with any unforeseen circumstances, such as a medical cost or auto maintenance. It’s simpler to talk about things like taking out a personal loan or creating a joint credit card before an emergency occurs.