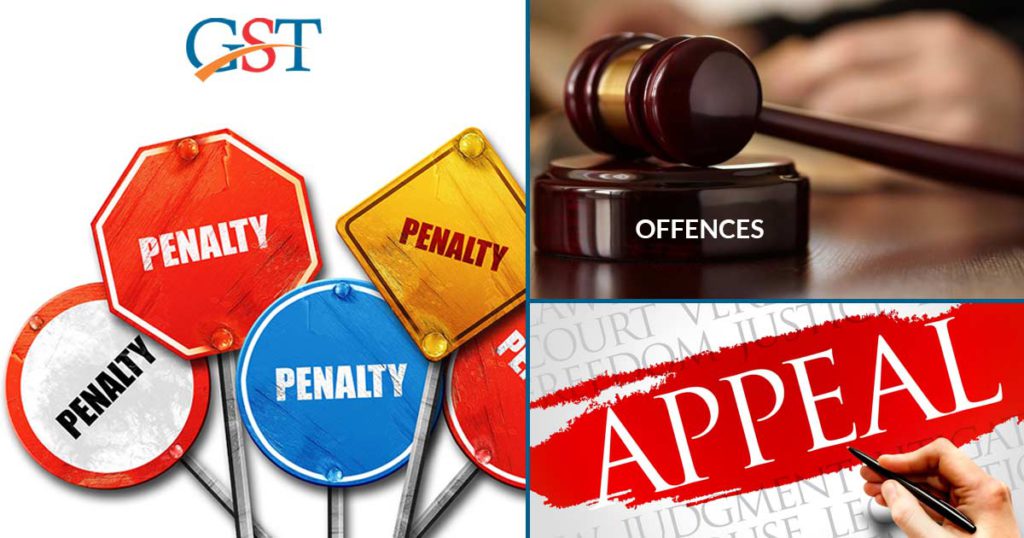 GST Penalties and Appeals in India

All Under GST, the return can be filed both online and offline. Under this new tax reform, there is common e-return for Central Goods & Service Tax (CGST), State Goods & Service Tax (SGST), Integrated Goods & service Tax (IGST) and Additional tax. Under GST, a registered taxpayer shall file GST return at the GST common Portal either by himself/herself or through a representative. Every individual registered under GST is required to file a return, irrespective of whether a sale or purchase has been carried out during the return period.

Being a destination based, transaction wise tax, Goods and Services Tax or GST, ropes in strict compliance procedures for all the taxpayers or people falling under the gamut of the same. Since every transaction is being recorded and tracked between the source and destination, it is obligatory for the taxpayers to maintain and declare information with utmost accuracy.

Prosecution under GST is a legal proceeding conducted against someone for a criminal charge. When the following offenses are committed with the deliberate action to cause fraud it becomes liable for prosecution

There are 21 offenses under GST. We have mentioned a few here. For the entire list of 21 offenses please go to our main article on offenses.

If any of the offenses are committed then a penalty will have to be paid under GST. The principles on which these penalties are based are also mentioned by law.

There are some general rules regarding penalty which remain the same in all laws whether in tax laws or contract law. These rules are as follows

What is an appeal?

An appeal under any law is defined as an application to a higher court for reversing the decision of the lower court. An appeal is done only in cases of legal disputes. Appeals are made to dissolve disputes.

A person who is not satisfied with any order or decision passed under GST which is against him can appeal against the same. The first appeal goes to the First Appellate Authority against the order passed by the adjudicating body.

If a taxpayer is not satisfied with the First Appellate Authority’s decision, they can go to National Appellate Tribunal, and then appeal to the High Court and Supreme Court at the end.

To avoid stressful appeal and litigation process, a taxpayer may claim advance ruling. The authority gives advance ruling in writing to the applicant.

Cases in which Appeal cannot be Filed

On the recommendation of the council, the board or state government may fix monetary limits for appeal by GST officer to avoid unnecessary litigation expenses and to regulate the filing of the appeal.

Appeals cannot be made against the following decisions

The GST Act specifies 21 separate offences that can attract penalties under GST regime. There are of course offences that, though not part of the list, carry GST penalties that are decided on a case by case basis.

The following is the list along with key details of these 21 GST offences: